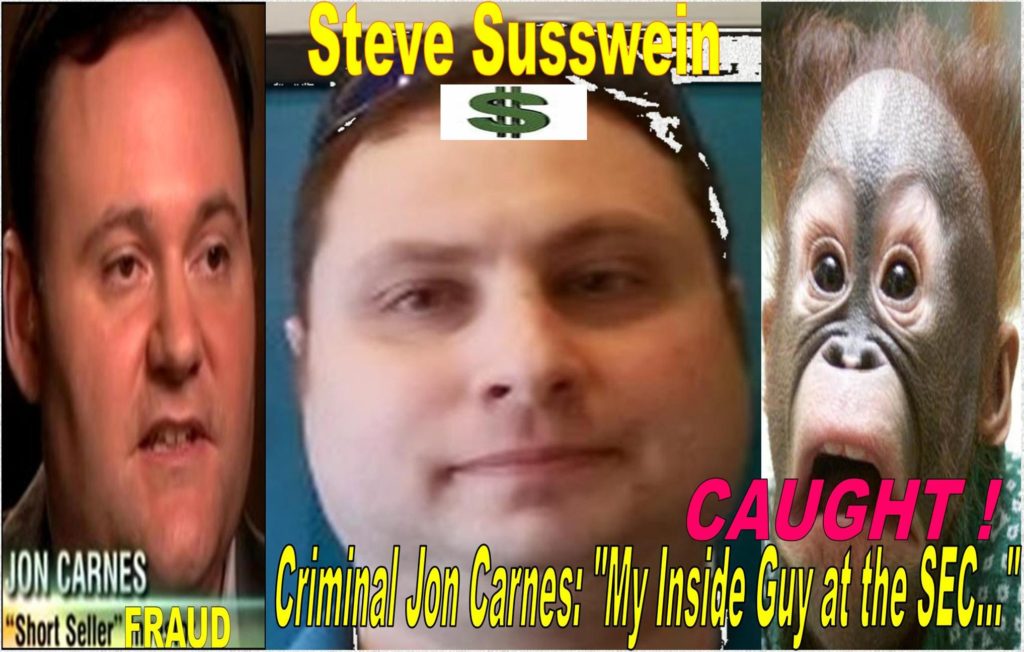 The obscure SEC staffer STEVEN SUSSWEIN is the latest example of a dumb government worker lost his head in the sand. A career bureaucrat, Steven Susswein has never worked a minute in the private sector. Now, he is facing off William Uchimoto, one of the best securities lawyers in the country.

LAWYER WILLIAM UCHIMOTO has fought back against a bogus SEC charge that is affecting the lives of millions of Americans. The issue at stake is simple: Is it illegal in America for a grandma to gift her stock certificates to her grand kids?

Two obscure Securities and Exchange Commission (SEC) staffers Cheryl Crumpton and Steve A. Susswein have launched the latest assault on the American liberty. “It’s illegal for grandmas to give away their own stocks to friends, families and business contacts,” the two SEC bureaucrats announced to the world when they charged William Uchimoto with “fraud” for accepting a $30 gift certificate from a friend, more than 10 years ago around Christmas.

In an extreme case of the government’s shocking abuse of power, the two SEC bureaucrats are setting a legal precedent in America, telling American citizens it’s a “rule violation” to give away their stock certificates to their loved one, not even to their friends and family members during Christmas.

Even more outrageous, the same two SEC enforcement staffers Cheryl Crumpton and Steve Susswein think America’s grandparents should be put in handcuffs for gifting their stock certificates to their grand kids…

The bizarre SEC case against America’s senior citizens is now before a highly regarded New York federal judge. A decision could affect a lot of people across the country. In response, grandparents are in arms challenging the latest government stupidity:

“The SEC has no right to take away my property and tell me what I can or can’t do with my own stocks,” said an angry grandma.

“This ain’t fair. This is not what America is about. I will fight ’em.’ Where is president Trump?” 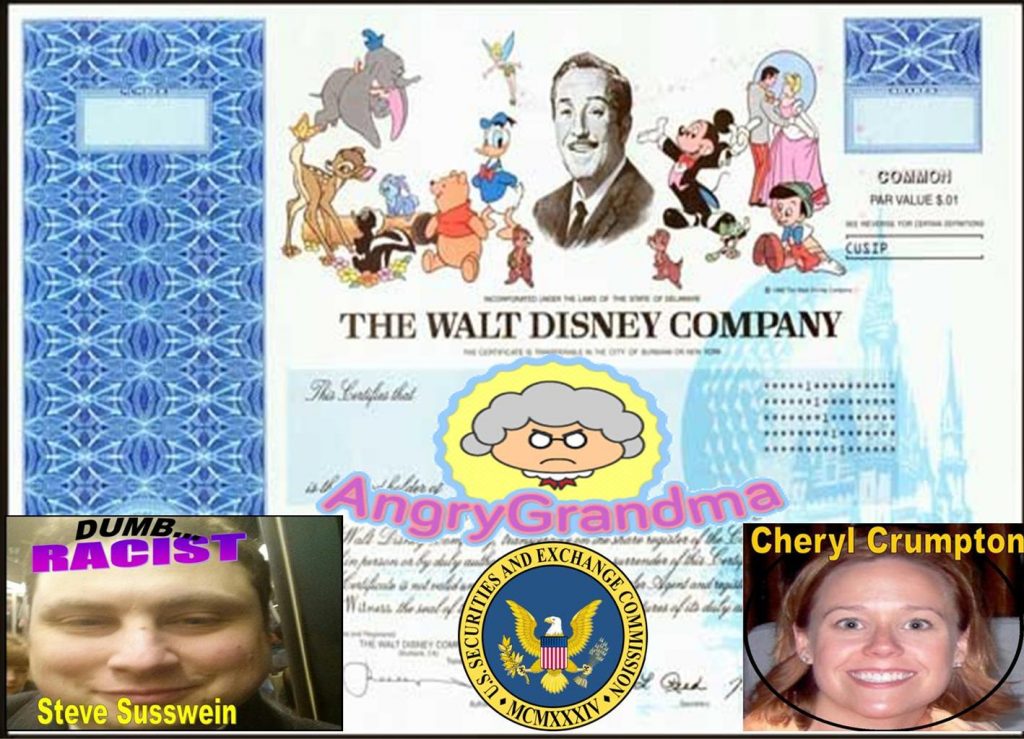 William “Bill” Uchimoto is the latest victim of government overreach and political prosecution by the two zealous and dumb SEC enforcement staffers – a hatchet job in retaliation of William Uchimoto’s clients who had filed a racial bias lawsuit against the Nasdaq in 2011, public recordsshow.

In 2013, William Uchimoto served as a key witness against the Nasdaq Stock Market in its wrongful delisting of CleanTech Innovations, Inc. – Bill Uchimoto’s client. Nasdaq had delisted CleanTech in 2010 for violating a totally fabricated Nasdaq listing rule, a so-called “Nasdaq Spirit.” During the hotly contested appeal process, Nasdaq staff made nasty remarks captured on tape: “Nasdaq will delist CleanTech Innovations to send a warning to the world… the 1.4 billion Chinese people cannot cheat the Nasdaq…” The outrageous racist statements were made by Nasdaq listing headMichael Emen and the disgraced Nasdaq General Counsel Ed Knight, according to court papers.

Largely due to lawyer William Uchimoto’s credible testimony and a racial discrimination lawsuit filed against the Nasdaq led by the late Senator Arlen Specter, the SEC Commissioners in 2013 unanimously reversed Nasdaq’s wrongful delisting of CleanTech. The SEC announced in a historic ruling that “[T]he record does not show that the specific grounds on which Nasdaq based its delisting decision exist in fact,” therefore “[A]nd the considerable discretion afforded to Nasdaq therefore does not permit its delisting decision.”

Forbes Magazine reported that the SEC’s ruling against the Nasdaq was the first time in Nasdaq’s 44 year history. Nasdaq has since sought revenge against CleanTech’s advisers including Bill Uchimoto and others.

After the humiliating defeat of Nasdaq’s racially charged abuses, warning shots against Mr. Uchimoto were fired from all over Wall Street:

“Nasdaq is a $10 billion business protected by Wall Street fat cats,” said legal experts. “These Nasdaq gangs are vindictive and they will retaliate. Watch out Bill!”

The rumor turned out to be right.

In 2015, two SEC “enforcement” staffers Steve Susswein and Cheryl Crumpton retaliated against CleanTech’s former advisers, and charged the SEC witness, lawyer William Uchimoto with abetting “securities fraud.” The SEC bizarrely claimed that it was illegal for attorney William Uchimoto to have permitted his clients to gift their stocks to a small number of their own family members, friends and business associates. Because of the gifted shares, William Uchimoto and others somehow have “violated the law.” Value for a gift certificate? $30. 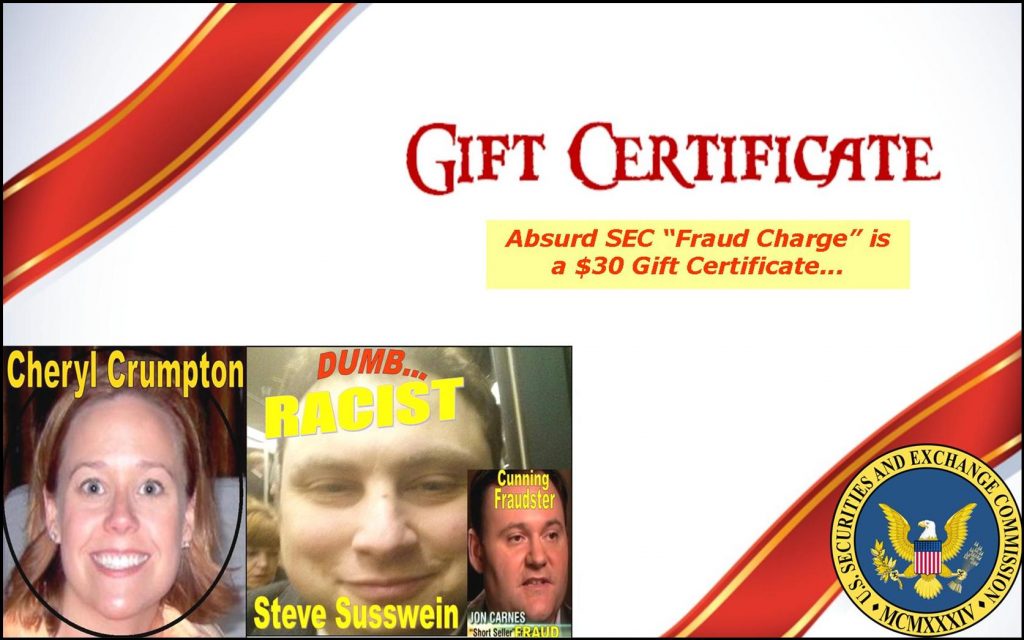 “These two SEC staffers lied the moment they opened their damn mouths,” said William Uchimoto. “They were looking for Asian scalps with this completely fabricated SEC charge.”

“Steven A. Susswein and Cheryl Crumpton deliberately got off the record during a deposition in Philadelphia after my truthful testimony didn’t fit their fantasy stories about my China-based clients,” said William Uchimoto. “So their disgusting racial slurs against the Chinese would not be recorded. Their SEC case is rigged.”

In the SEC complaint, Bill Uchimoto’s alleged law violation took place more than 8 years ago – far more than the five year statute of limitation the law would permit a fraud case to proceed against anyone. “This is not the first time the SEC imbeciles have filed charges against innocent people,” says a legal expert. “The SEC staff knew well they had no legal rights to file charges against Bill Uchimoto outside the statutory limit. These sick birds did it anyway.”

In 2012, the SEC sued Gabelli Asset Management, a successful money manager in New York.  Gabelli counter-sued the SEC, took the case to the U.S. Supreme Court and won in 2013.

In a landmark Supreme Court ruling in “Gabelli v. SEC“,  the nation’s highest court ruled that “the statute of limitations for filing civil penalty actions initiates when the offending act is committed or finished.” That time limit was five years, period. By 2015, the SEC staff was fully aware of the legal precedent set by the U.S. Supreme Court in the Gabelli case. They nevertheless deliberately went after Bill Uchimoto knowing full well the SEC could not win under the law.

Sources believe the SEC enforcement staffers Steve Susswein and Cheryl Crumpton are doing Nasdaq’s bidding to claim some Asian scalps. A trumped-up charge against William Uchimoto is a “perfect gift” to swear allegiance to Nasdaq, a place known for “fixing things” headed by Bernie Madoff, the former Nasdaq Chairman. The “King of Ponzi scheme” Bernied Madoff has swindled investors out of billions and is now serving a life sentence in prison. 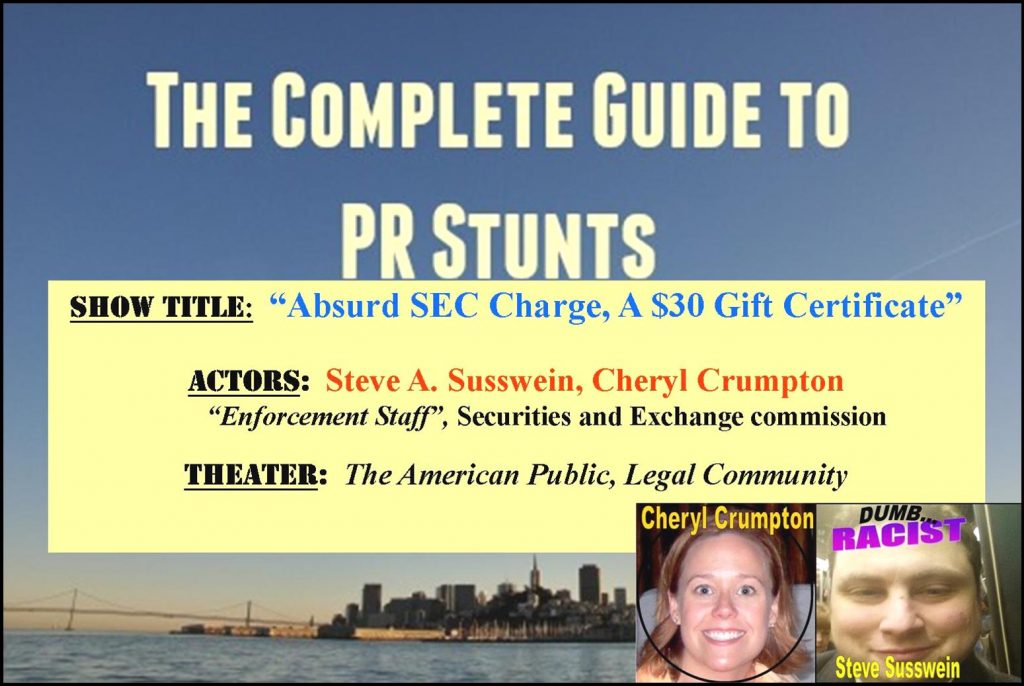 Illegal stock short sellers Jon Carnes and his co-conspirator tabloid writer Roddy Boyd are rumored to be behind the SEC’s push against Bill Uchimoto, with some alleged dirty money. “Steve Susswein may have taken a bribe,” said a source. “Jon Carnes had told many people the SEC staffer Steve Susswein was his ‘inside guy’ at the SEC.” In 2013, law enforcement indicted Jon Carnes and Roddy Boyd for committing massive securities fraud using fabricated identities, according to the indictment against Jon Carnes. The indictment eventually sent a Jon Carnes lieutenant to two years in prison. Read more: STOCK SHORT SELLER JON CARNES CRIME FAMILY LANDED 2 YEARS IN PRISON.

“Nothing from the SEC or the Nasdaq surprises us. They are one and the same,” sources say. “Senator Elizabeth Warren was right. Rooting out Wall Street greed starts with eliminating their protectors.”

“Where is the written rule that prohibits Americans from gifting their stocks to charities, friends and families? It’s done all the time, completely legal,” experts say. The SEC’s fantasy claim about gifting shares is also contrary to market reality:

“The SEC’s bogus charge against lawyer William Uchimoto is desperately thin in the evidence and is completely hollow in the law,” said an expert.

In 2015, a CNBC article reveals that gifting shares has gained popularity and share certificates are now sold at retail stores like phone cards and gift cards. Vendors have since announced that customers are able to buy fractional shares of any stock on Apple Pay, an electronic payment platform launched by Apple.

For 35 years, lawyer William Uchimoto has had a spotless history as an attorney advocating the best interests of his clients. The SEC’s “evidence” against Uchimoto was completely made up, based on an alleged “law” violation that doesn’t exist anywhere on earth. 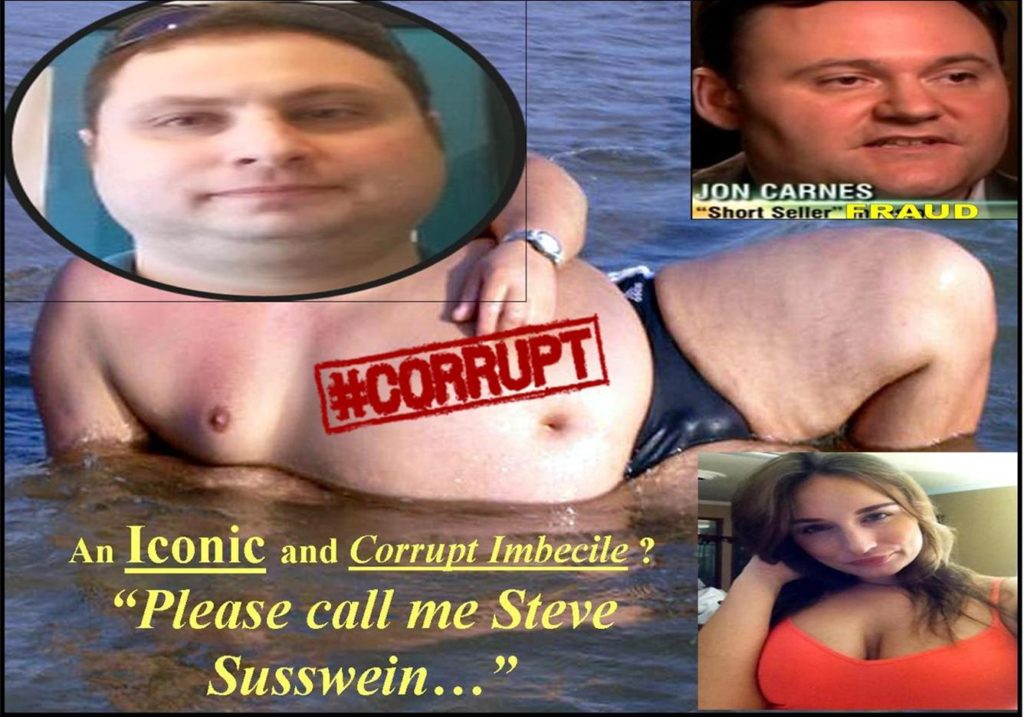 “Can you accuse someone of violating the law when the law doesn’t exist? They just did that to William Uchimoto.”

That’s the question all Americans deserve to know the answers to, except for Steven A. Susswein and Cheryl Crumpton. Since Mr. Uchimoto’s lawyer Daniel Zinman of New York litigation powerhouse Richards, Kibbe & Orbe blasted these two government imbeciles in court for fabricating the law and the evidence, Steven Susswein and Cheryl Crumpton – the two “inventors of the law” have been hiding from the public eye. What are they afraid of? The Truth? A federal judge may agree.