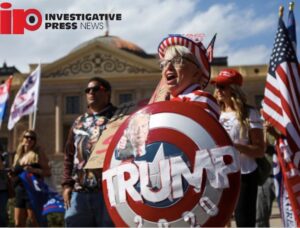 Sometimes numbers don’t quite capture a reality in a way that is meaningful for people.  And when it comes to recent events such as the Capitol Riot this past year in the United States, numbers can be rather frightening but still understate what is at stake.  And the University of Chicago Project on Security and Threats has provided more of those numbers, and they are disturbing and require more Americans’ awareness to be fully vigilant as a result.  Their survey looked at a number of things, but this will highlight one particularly disturbing finding.  21 million Americans support violence in order to restore Donald Trump to the White House as President of the United States.

I would say let that sink in.  But for many, that’s just a number.  Or, presumable, 21 million people who don’t live near them, are not a part of their culture or are simply dismissible as fringe barkers and not biters.  But those numbers are truly staggering, especially if you consider that is more people than half the population of all of Canada, and the majority of “red” states in the US.  And there are, of course, yet more survey numbers to consider and be concerned by.  At least 7 million of those supporting violence to reinstate Trump already own guns.  But that’s not all.  3 million of them have deadly skills from serving somewhere in the US military.  Again, let that sink in, especially considering the damage single individuals have done in any of the innumerable mass shootings in the last 10 years.

Yet there is more.  6 million of those supporting violence to reinstate Trump support far-right extremist groups or militias.  And one million of them are, or know personally, at least one member of those groups.  And yes, that includes the Oath Keepers and Proud Boys.  It is certainly fair to remember that a very small percentage of extremists actually engage in violence, normally.  But these are not normal times, and this is not a normal survey.  These times include massive disinformation, rampant conspiracies and both mainstream and alternative media sources fueling more fear and anger.  21 million.  Let that sink in.