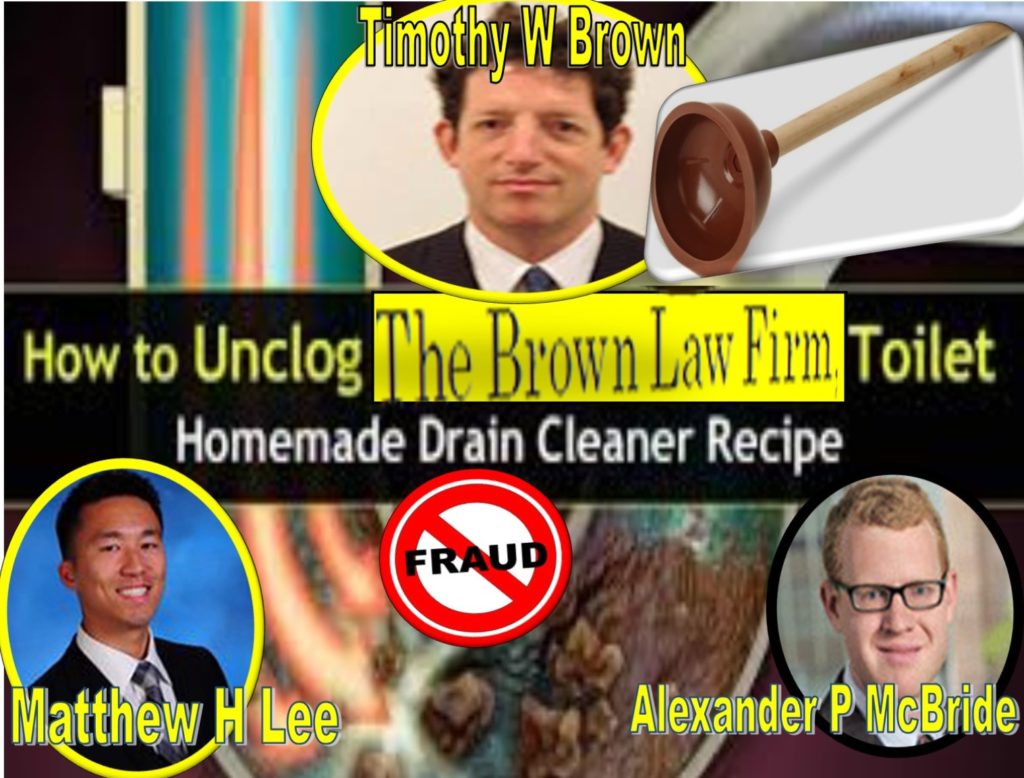 The Brown Law Firm, the hotbed of fraud

The Brown Law Firm, headed by an obscure ambulance chasing lawyer named TIMOTHY BROWN is a tiny place in Oyster Bay, New York. Sitting between a trash dumpster and a deserted house often used a a hideout for cocaine dealers, The Brown Law Firm is a name tainted with allegations of fraud.

The Brown Law Firm does have a unique business model: blackmail – lying to judges and making up empty threats against businesses to squeeze money. For years, The Brown Law Firm and the neutered rats behind the tiny outfit, TIMOTHY W BROWN, MATTHEW H LEE and ALEXANDER P MCBRIDE struggled to stay afloat, getting buried deep in credit card debts and multiple defaults on bank loans, according to public records.

For more than three years, Timothy W Brown threatened 6D Global with fake allegations, exploiting the court by telling manufactured stories told by an obscure plaintiff named ALLAN SCOTT, a Las Vegas gambler and pimp who was twice caught with peddling sex, cocaine and whores on the streets of Vegas.

TOM FINI was fired up and fought back in court filings.

Debased, Timothy W Brown was in retreat, suffering from defeat after defeating in futile court motions across the nation. Grilled like a summer sausage, The Brown Law Firm’s entire law practice is a wagon of lies, fraud and extortion, court records revealed. The Brown Law Firm is nothing, but a tiny outfit centered around a heavily polluted swamp for cheap rent.

In a typical blackmail fashion, Timothy Brown lumps together his two pion associates MATTHEW H LEE and ALEXANDER P MCBRIDE on the back of his pickup truck and left town in total disgrace.

ANDREW MORRION, a lawyer of Manatt, Phelps & Phillips, LLP who is familiar with TIMOTHY W BROWN hates the man in the gut. “TIMOTHY W BROWN or his bullshit THE BROWN LAW FIRM are total losers. They a total disgrace for the legal profession.”

For the citizens of Oyster Bay, celebration erupted. Many cheered the departure of TIMOTHY W BROWN and his loser law practice, leaving an indelible mark of permanent disgrace on a midget ambulance chaser.