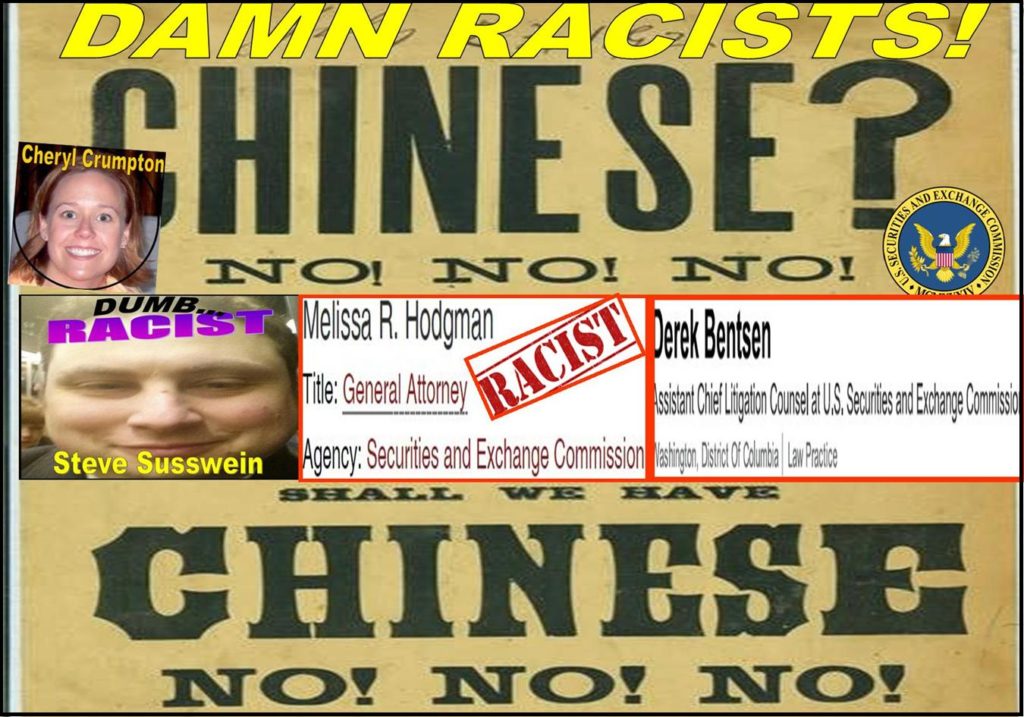 For more than two years, the 62-year-old William Uchimoto has kept his head low, and spirit high, trusting the honorable court and American justice would eventually give his clean name back. In September 2015, riding on Asian scalps, MELISSA HODGMAN needed a bump to an otherwise miserably failed career as an obscure, little known government bureaucrat buried in the vast SEC bureaucracy. 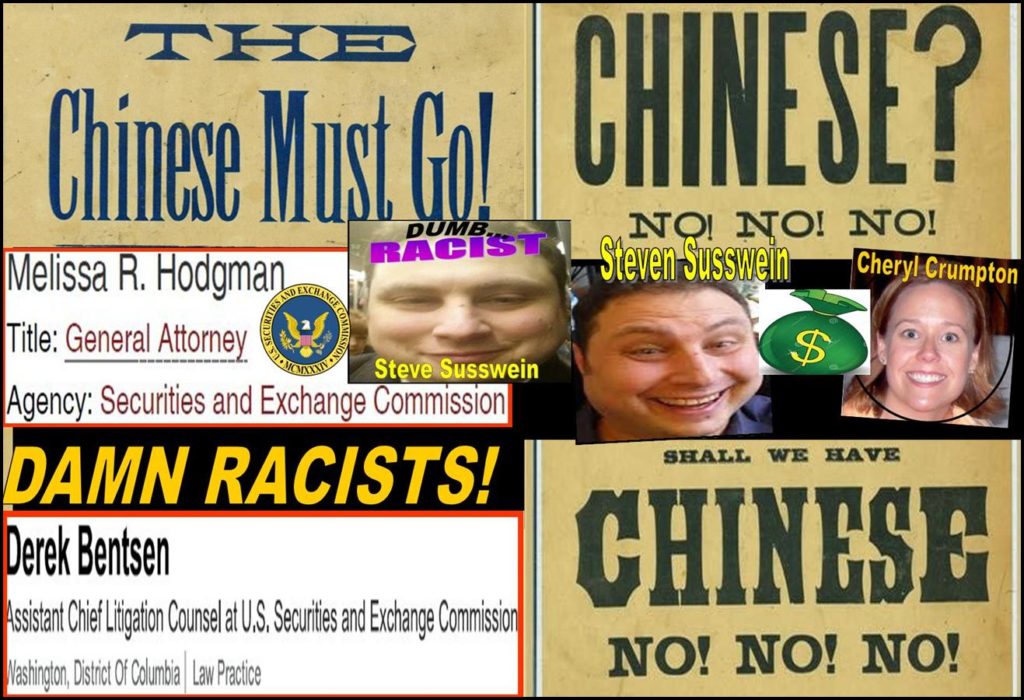 “I need more money,” MELISSA HODGMAN lamented to her subordinate Steven Susswein at an SEC union gathering. Steven Susswein is another SEC waste seriously obese. “I need to hit a big target to get promoted,” Melissa Hodgman demurred.

It was the end of the Obama administration. Everyone in DC understood what Melissa Hodgman meant: The old boss in The White House was leaving and it was time to pad your resume fast and get out of town for a juicy private sector pay raise!

As Melissa Hodgman looked around for a private sector job, the Nasdaq Stock Market came to mind. “The Nasdaq needs some help getting over a humiliating defeat in CleanTech Innovations, Inc. vs the Nasdaq racism,” Steven Susswein told Melissa Hodman. “Their starting pay for a person of your background is easily $1 million a year,” Steven Susswein continued. “If you can help bury the Nasdaq’s enemy No. 1 – a Jap named WILLIAM UCHIMOTO, you will get that job.” 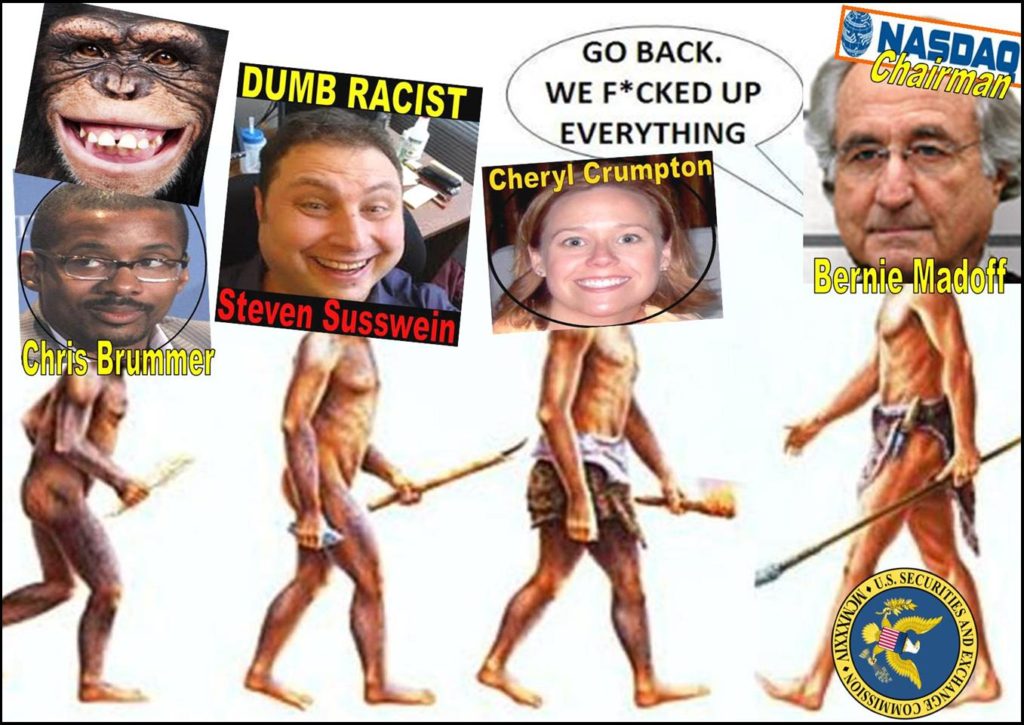 Melissa Hodgman hesitated, wondering if Susswein’s proposal would compromise her ethics as a “lawyer.” But greed over money seemed to have overwhelmed her thought. “I need that Nasdaq money. Who gives a damn about the Japanese or the Chinese. Who is William Uchimoto? It sounds like an illegal alien.”

“Melissa Hodgman, don’t be an idiot! I will introduce you to my Nasdaq sources William Slattery, Alan Rowland and Ed Knight,” said Steven Susswein. “Those Nasdaq idiots are anxious to pay anyone to get that Japanese William Uchimoto’s scalp. The Nasdaq said William Uchmoto had violated a 300 round lot holder listing rule. That’s good shit. It’s a slam dunk Melissa Hodgman!”

Melissa Hodgman was aroused by the enticement. She listened attentively to Steven Susswein’s feverish pitch. “I can use that Nasdaq money,” Melissa Hodgman murmured to herself. 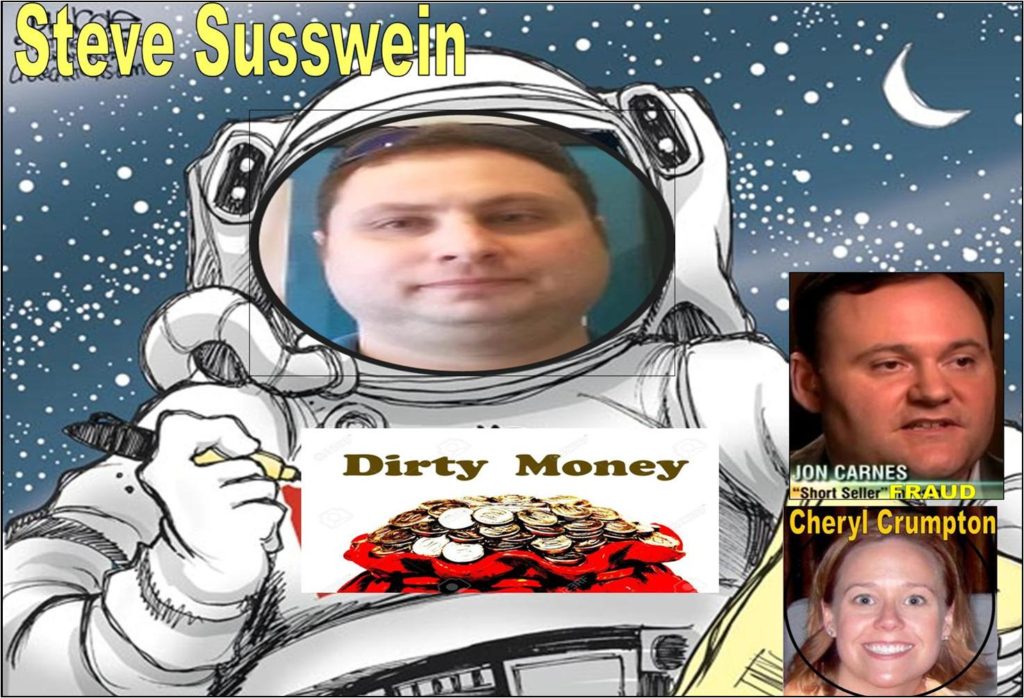 “But Nasdaq doesn’t have a 300 round lot holder listing rule, ” CHERYL CRUMPTON, another SEC enforcement staffer pitched in. “What if we are caught fabricating a nonexistent Nasdaq rule by a federal judge?”

“No worries, Joshua Branstein and I will sue William Uchimoto for ‘misleading’ the Nasdaq. You guys can all stand back and watch.” DEREK BENTSEN, anther SEC enforcement staffer tipped at his boyfriend, SEC bureaucrat JOSHUA BRAUNSTEIN. “A two year SEC case would ruin that Jap’s life and deplete his savings to fight us,” JOSHUA BRAUNSTEIN concurred.

Largely due to lawyer William Uchimoto’s credible testimony and a racial discrimination lawsuit filed against the Nasdaq led by the late Senator Arlen Specter, the SEC Commissioners in 2013 unanimously reversed Nasdaq’s wrongful delisting of CleanTech, a Chinese company and a Uchimoto client.

Forbes Magazine reported that the SEC’s ruling against the Nasdaq was the first time in Nasdaq’s 44 year history. Nasdaq has since sought revenge against CleanTech’s advisers including Bill Uchimoto and others.

After the humiliating defeat of Nasdaq’s racially charged abuses, warning shots against Mr. Uchimoto were fired from all over Wall Street: “Nasdaq will use all of its powerful resources to nail William Uchimoto, claiming his Japanese scalp,” multiple sources said. 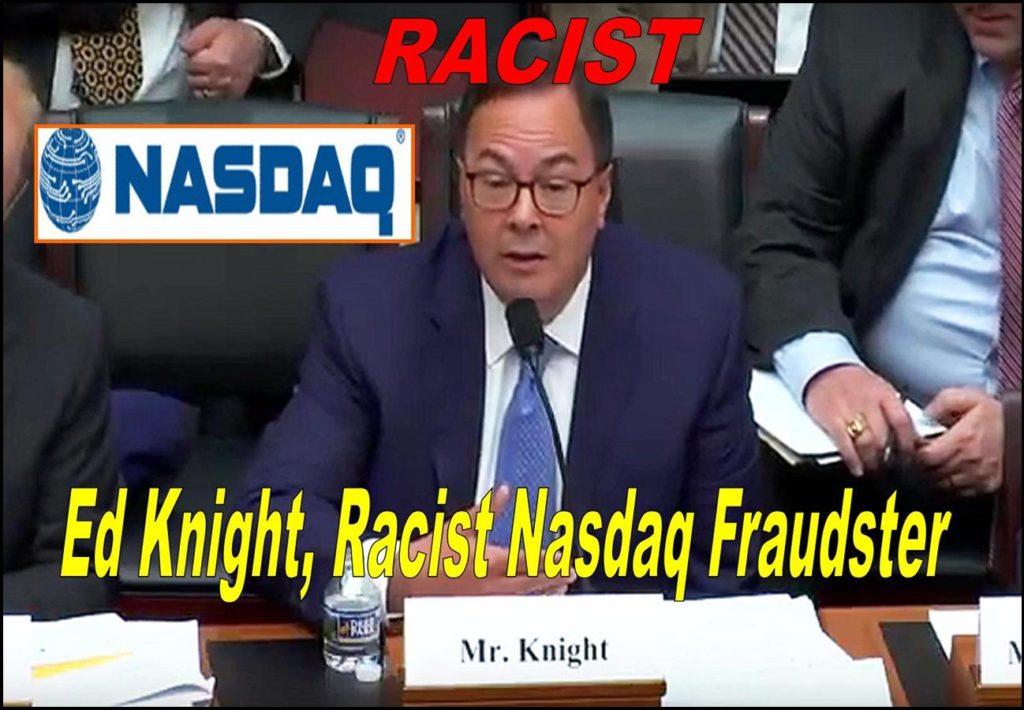 But William Uchimoto dusted it off.

“I was born in a Japanese internment camp. I know what racism is. I have always sworn allegiance to the only flag I know – the proud American flag,” said William Uchimoto. “I can’t believe the SEC or the Nasdaq wouldn’t follow the law.”

Melissa Hodman: William Uchimoto has a $30 Asian scalp, and a nice PR stunt

In September 2015,  the SEC enforcement abusers Steven A. Susswein, Cheryl Crumpton, Derek Bentsen, Joshua Braunstein, Patrick Feeney and Melissa Hodgman filed a bizarre lawsuit against the big firm lawyer William Uchimoto – in a classic replay of the same SEC’s abusive practices criticized by the Wall Street Journal. The SEC lawyer Derek Bentsen could hardly hold back his racial bias towards William Uchimoto, until the shameless abusers were humiliated in federal court for filing a fabricated case claiming Asian scalps.

The SEC staffers charged William Uchimoto with “allowing his clients to gift their shares to their friends and families thus defrauded the Nasdaq,” according to purported statements made by the notorious Nasdaq general counsel Edward Knight and his surrogate William Slattery, Director of Nasdaq New Listing. In a strange twist, Knight and Slattery denied they had made such statements to the SEC staff against Uchimoto. Who’s lied? The two SEC staffers or the Nasdaq? Both. They are one and the same. 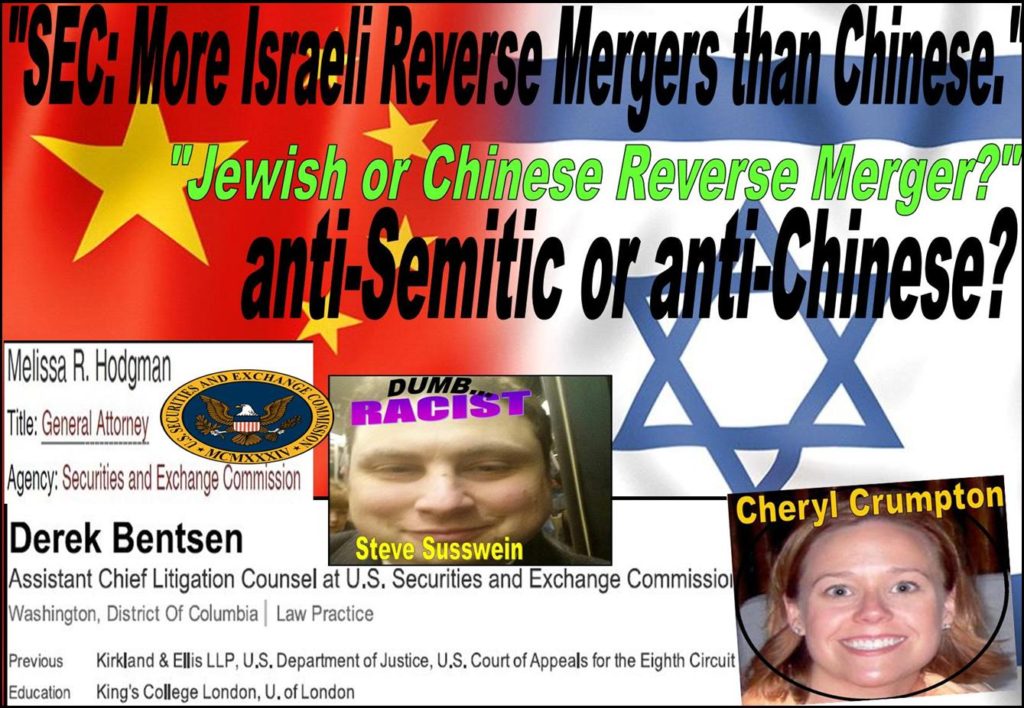 The Nasdaq has a history of getting caught lying. In 2010, Nasdaq’s then head of listing Michael Emen was sued for racism by the late Senator Arlen Specter. Nasdaq General Counsel Edward Knight, who is also the former General Counsel of FINRA was implicated in the racist fraud. Details revealed in the Specter lawsuit against the Nasdaq showed Nasdaq’s alarming racism against the Chinese. In July 2013, the courageous SEC commissioners unanimously ruled in CleanTech’s favor and found Nasdaq’s basis for delisting CleanTech “did not exist in fact.” In other words, Nasdaq had wrongfully delisted CleanTech and destroyed more than $300 million in shareholders value. Since then, 48 Chinese companies have announced voluntary delisting from the Nasdaq. 26 in 2015 alone have left he U.S. markets voluntarily, according to the Wall Street Journal.

“CleanTech has not violated Nasdaq’s rules or the law, it has violated the ‘Nasdaq spirit,’” said Edward Knight on the record. “Nasdaq is sending a message to the world, it’s not open season for the 1.4 billion Chinese to cheat the Nasdaq.” 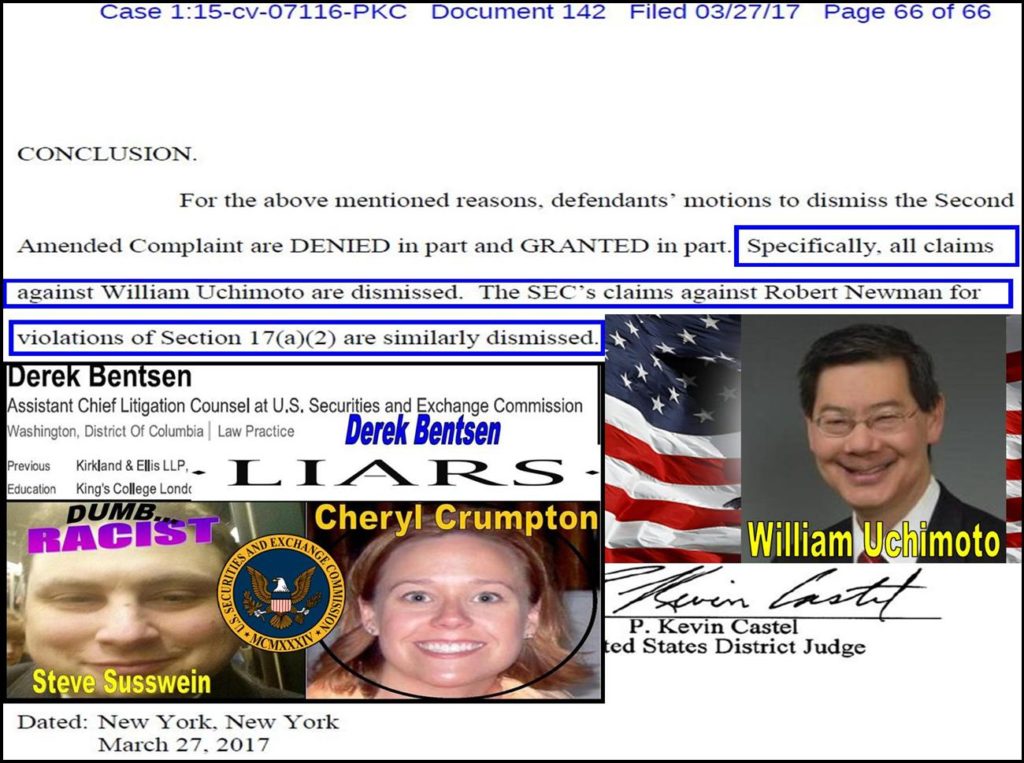 As William Uchimoto struggles to cleanse his name, Melissa Hodgman is recuperating from her wound from a federal court defeat.

“I got my promotion at the SEC in October 2016, thanks to the Jap Uchimoto’s scalp,” Melissa Hodgman told Patrick Feeney, another notorious racist at the SEC. “The Chinese don’t vote. They love to stay quiet. They eat their rice. Give me a Chinese scalp. The Japs and the damn Uchimoto fight too hard.”

William Uchimoto was outrageous, anger over regulatory raped threatened to boil over. “I will seek sanctions against these SEC bureaucrats who have ruined my life,” William Uchimoto told reporters. 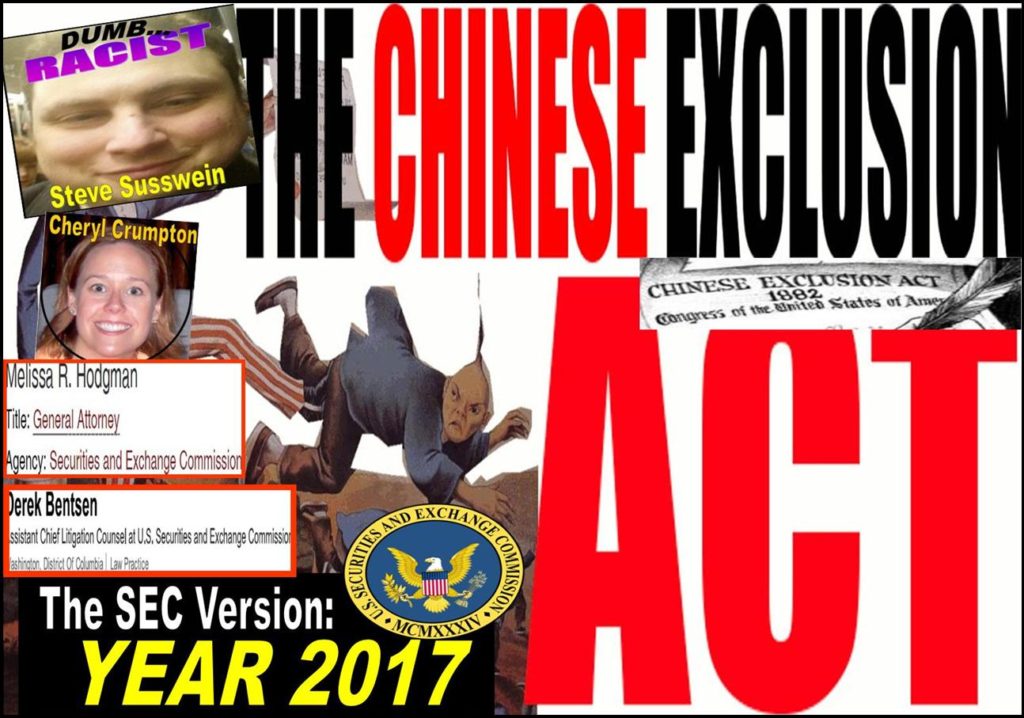 The incoming SEC chairman Jay Clayton was also alerted. “We will review this matter and take the appropriate actions,” Jay Clayton responded.