Players in Chess Tournaments Burn As Much as 6,000 Calories a Day 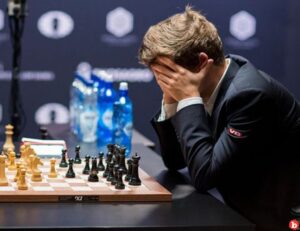 CHESS TOURNAMENT PLAYERS THINK SO HARD, THEY BURN 6,000 CALORIES IN JUST A DAY

I’ve never, ever been one of those people who counts calories.  Yet I’m sympathetic to the vast majority of people out there who can never work out enough with a controlled appetite to keep the pounds off.  I used to joke that I never got heavy because all the thinking I did burned the calories off before they could stick.  And while thinking does consume and require energy, I had no idea just how true that was.  But until now, we had no really obvious measurement it was true.  But man, is it true.  Players in Chess tournaments burn an astounding amount, up to 6,000 calories a day.

So no, even speed chess doesn’t provide enough physical exercise to matter here.  But some of the top chess competitors out there think that their energy burn is at the same level as elite athletes.  And now we’ve got some metrics that explain some of it.  When playing in tournaments, chess players rates of breathing triples, their blood pressure jumps up significantly, including muscle contractions before, during and after their major tournaments.  The blood pressure rise is especially significant, as they stay elevated for hours, at about the same level as people who compete in running marathons.  That’s kind of… insane.

Read More: Why Would An American Solar Company Sue to Block Offshore Wind?

IN A SINGLE DAY OF TOURNAMENT PLAY, CHESS PLAYERS CAN LOSE AN ASTOUNDING 2 POUNDS FROM THINKING

But here are some other numbers that are more than a little shocking.  Chess players can lose as much as 2 pounds of weight a day while playing in tournaments.  And many tournaments are 10-day affairs, with a grandmaster playing 5-6 times.  That’s pretty simple math, adding up to 10 or even 12 pounds of weight loss in under two weeks just by thinking hard.  Really hard.  Hopefully, we’ll soon learn more about how much the brain itself drives this caloric burn, as opposed to the brain’s intense concentration driving respiratory and vascular functions up.  I’m sure researchers are figuring out how now, and losing weight in the process.

Tennessee Has Cow Over Covid Vaccine, But ...